The fieldwork of the second season started on the 10th of January 2013. The main objective of this season was the clearing of stone debris from earlier excavations at the site south and east of the church in order to determine the functional architectural contexts of the building and to facilitate the movement of tourists around the site.

According to Shinnie’s sketch plan, there were supposed to be mud-brick ruins. And that was the case of the area between the church and the southern external wall of the monastery. Yet, it turned out during the excavation that the sundried brick ruins are the remnants of a church (the Southern Church). It is a late, very small church made of sundried bricks adjoining the southern wall of the previously excavated church, now called the Northern Church.

The Southern Church has an apse filled with a partially preserved synthronon made of sundried brick and covered with mud flooring. The apse is flanked by two rooms; the northern one is probably the prothesis, the function of the southern one is not clear. The western part consisted of two rooms and a staircase. The naos, apart from the altar screen, has no other internal divisions. The naos of the church was probably roofed by four domes.

A passage between the Southern Church and an outer wall of the monastery was flanked on both sides by the arches. There were two courtyards located in the south-eastern corner of the monastery. One of them, connected with a room in which stairs were found, served probably as a toilet. In the same room, along the eastern wall of the monastery, a 70 cm wide shaft was dug. In the area east of the Northern Church the topmost layer of the debris was removed what allowed to trace the plan of the monastic buildings, in preparation for more thorough cleaning of this part of the site next season. 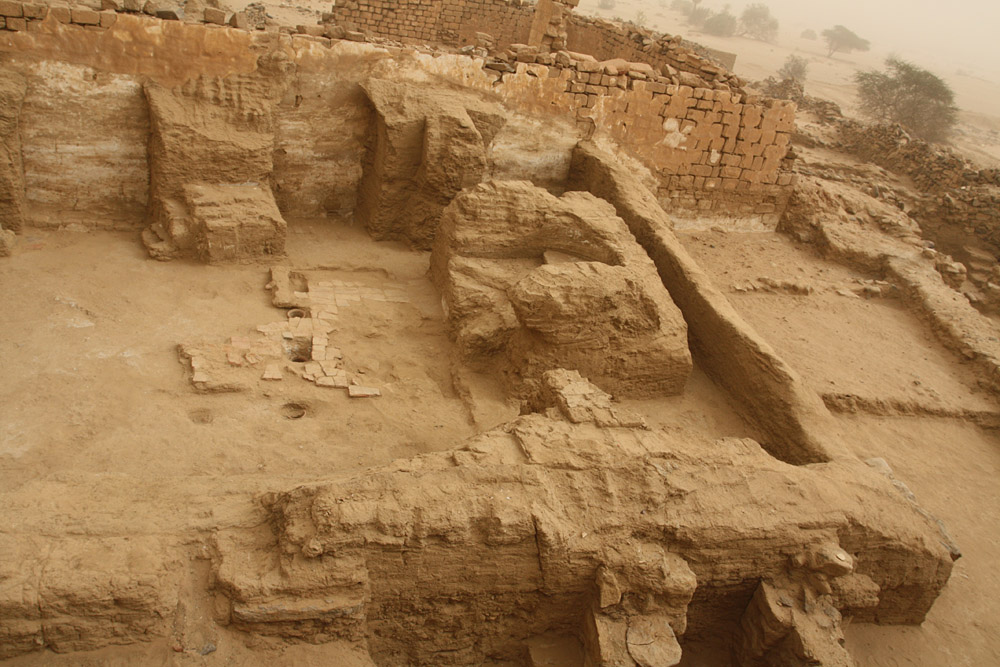 After the excavations, spoil heaps from Peter Shinnie’s work east of the monastery were partly removed with a loader.

The geodetic survey during the 2013 season was done by using the laser tachymeter (total station type), model Leica TCR 407. In the main part, it consisted of the inventory measurements of all of the architectural structures forming the monastery complex, preserved and visible on the surface of the site. Moreover, the total station was used for inventory measuring of the newly excavated structures and for different additional works (as taking the altitudes, setting of the profile lines, locating the graffiti and drawings on the walls of the Church N, making the sketches for cross-sections, etc.). The preliminary measurements of the uncovered architectural structures were later used by the draftsman as field sketches and afterward supplemented by a detailed drawing. 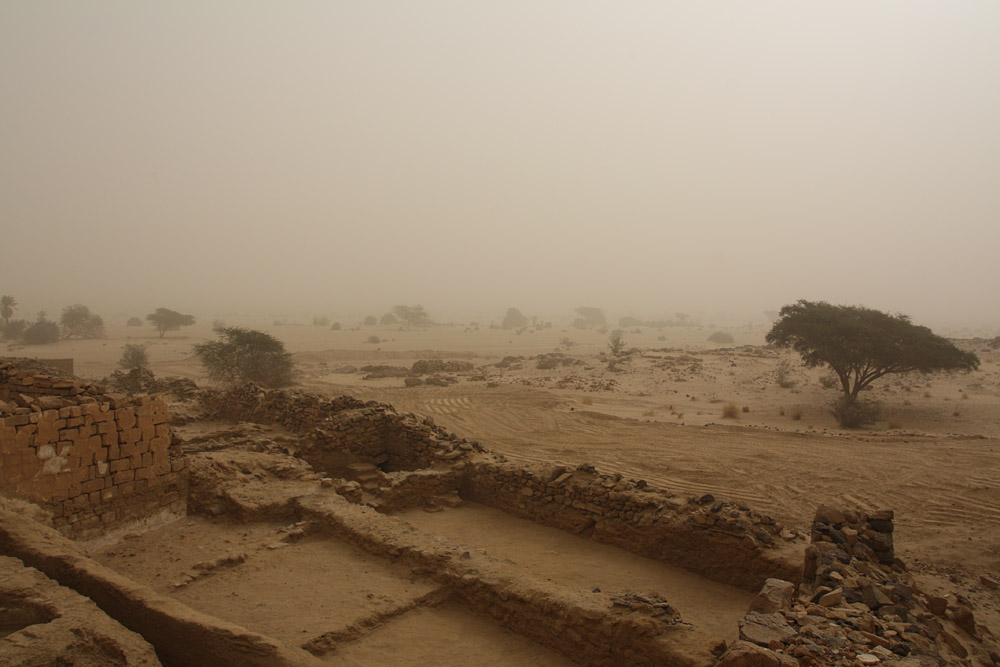 The epigraphic work during the 2013 season of excavation in the Ghazali monastery consisted of two parts. First, the inventory of wall inscriptions and drawings preserved on the walls of the northern church was created and photographic documentation thereof was made. The inscriptions have been preserved only on the outer walls of the church, as the interior is almost entirely devoid of plaster. Most of the inscriptions were hardly visible under a layer of dust and dirt, so the first stage was to provisionally clean the walls with pure water. The most numerous are the inscriptions on the western and southern walls of the church. Unfortunately, their state of preservation is poor in most cases, making them impossible to decipher but for single letters and, occasionally, words. In total, 47 inscriptions were registered on the western wall, 29 on the southern wall, 5 on the northern wall. Also, 6 graffiti have been identified on loose stone blocks most probably belonging to the fallen portion of the northern wall. It cannot be excluded, however, that more thorough cleaning will reveal further inscriptions.

As for the content of the inscriptions, one should mention in particular several visitors’s inscriptions, one of them written by a certain Jacob (?), a deacon, son of King Basil (in Greek), and another one by Kosma, an epidiakon (in Coptic). There are also some graffiti containing prayers, one of them is the Lamb of God prayer in Greek, found in the central part of the southern wall. Yet another category are names of saints and divine entities, for example Jesus Christ, Mary, Saint Onnophrios, or Archangels Gabriel and Michael. They were probably invocations expressing private piety of their authors. Finally, several monograms have been identified, most of them unintelligible for the time being.

The other part of the work was the registration and preliminary study of the epigraphic sources found during the excavation. Two major categories of sources can be distinguished: funerary stelae and inscriptions on pottery. In total, 19 fragments of epitaphs and 35 inscriptions on vessels have been discovered. The stelae are very fragmentary, only two examples have been 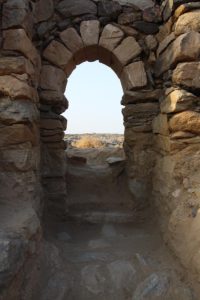 preserved almost completely. The epitaphs are made of terracotta (11) and sandstone (8), materials typical of the Ghazali funerary epigraphy. They represent more or less standard funerary formulae, attested in numerous examples from Ghazali, apart from one piece (G.13.038), which seems to have preserved a version of the “God of the spirits” prayer in Coptic, rarely to be found in the whole corpus of the Christian Nubian epigraphy. Regrettably, only one stela (G.13.057) contains the name of the deceased, namely John, a monk.

The collection of the inscribed vessels is pretty impressive. Most of them are parts of table wares (plates, bowls), only a few belong to utility wares (1 amphora, 1 jar, 1 bottle). In total, there are 2 painted and 33 scratched inscriptions. One can distinguish three categories of texts: private names, holy names, and monograms. To the first category, one can assign, for example, the name of John, a priest. To the second one, the names of Mary and Michael (Archangel) should be ascribed. The monograms are unintelligible for the time being.

There is also one object that does not fall into either of these groups, but certainly deserves a mention here: this is a fragment of a terracotta tile on which the Coptic alphabet was inscribed with a very clumsy hand in black ink. Especially worthy of attention is the fact that the alphabet has been written in the reversed order, starting from the omega in the left upper corner and going backwards in five vertical columns until the alpha. Below the Greek letters, the Coptic ones were added, but the ink is much faded in this place, so their exact order is uncertain. 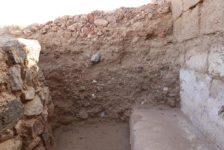 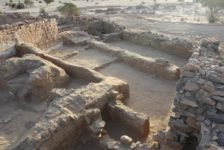 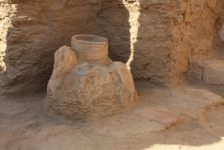 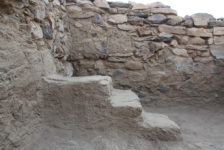 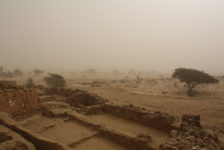 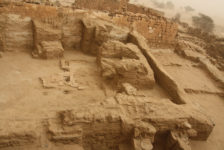 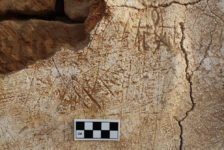 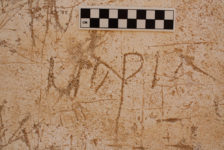