This page aims to bring Nubian monasticism closer to both the community of scholars and the general audience.

In 2012 I’ve started a program regarding Nubian monasteries. Thanks to the hospitality of the Oriental Institute, University of Chicago, and generosity of the Foundation for Polish Science and de Brzezie Lanckoronski Foundation, I lead a project on publishing the Qasr el-Wizz monastery carried out by a team of European scholars. The monastery has been fully excavated by George Scanlon on behalf of the Oriental Institute in 1965, yet only two preliminary reports in the Journal of Egyptian Archaeology have been published. Our objective is to publish the entire material recovered at the site and to make this exceptional collection available for the public.

I am also implementing a Polish Centre of Mediterranean Archaeology, University of Warsaw, project at the monastery at Ghazali in the Northern Province of Sudan, sponsored by the Qatar Sudan Archaeological Project. It is one of the best-preserved and 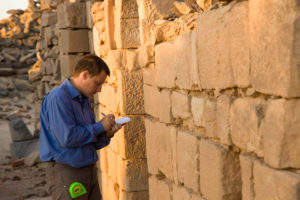 picturesque sites in Sudan. Its main objective is the preservation of the historic site and its various historical and cultural values for future generations. The project consists of two modules: excavations and site management, the latter of which, in turn, comprises protection, conservation, and presentation of the site. The latter part is being done in cooperation with www.archinos.com a leading company in the field of site management in the Nile valley.

In March 2015, I received the grant no. 2014/13/D/HS3/03829 from the National Science Centre of the Republic of Poland to prepare and publish a monograph on Nubian monasteries that will compare them with the monastic communities in other countries in the peripheries of the Byzantine world.