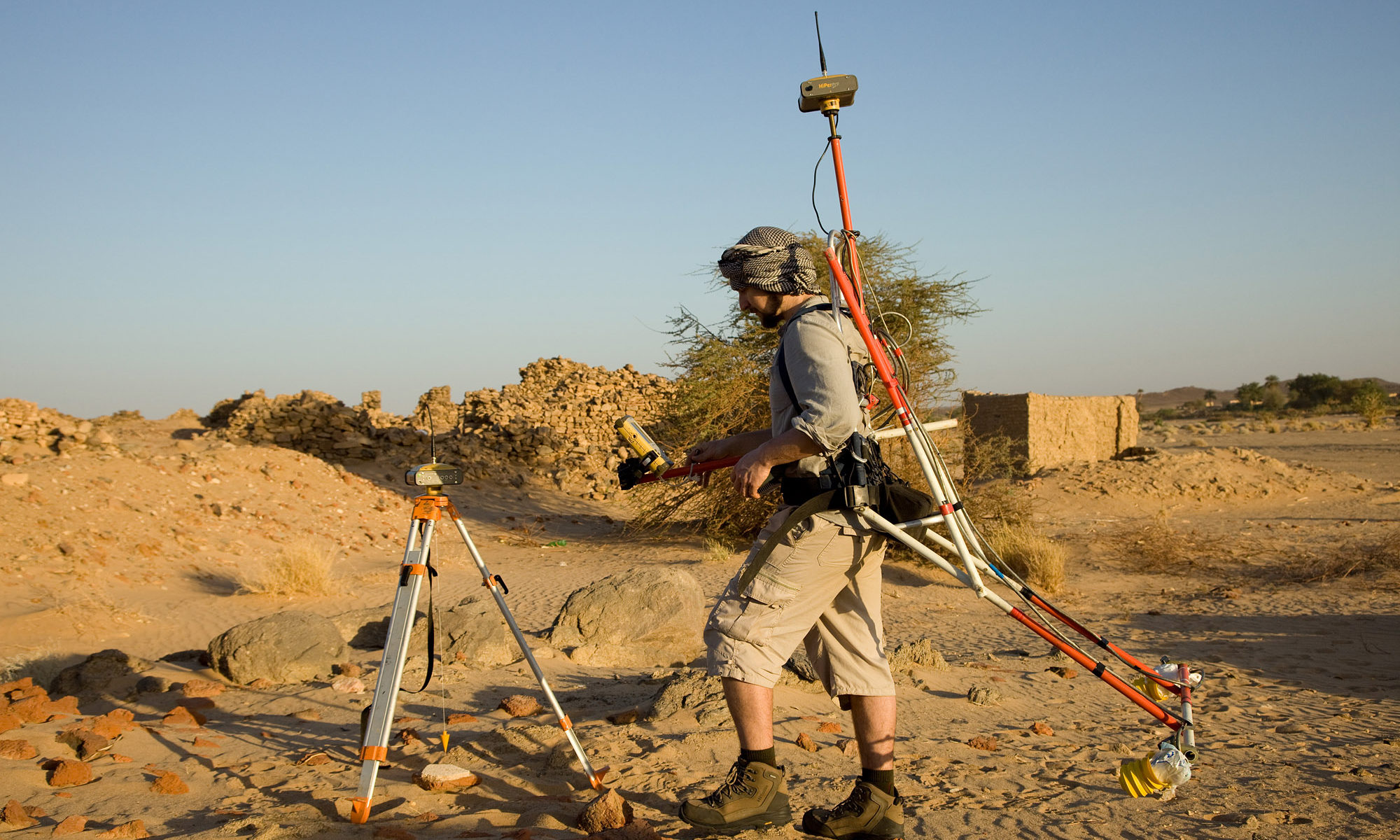 The first fieldwork season of the Ghazali Archaeological Site Presentation Project took place in January 2012. Its main objective was to survey and map the site using noninvasive remote-sensing methods of archaeological prospection, in order to get the best overview of the project area and to plan subsequent activities at the site. Furthermore, preparations for conservation and presentation of the site were begun by the removal of sand accumulated after the end of the archaeological research from 1954–1955. The survey of the site was carried out using both traditional methods and geomagnetic prospection and kite photography. The latter was also used for photogrammetric documentation of the site.

The non-destructive survey was carried out with the instrument which consists of three elements: two GPS (GPS RTK Topcon Hiper Pro) receivers (base and rover) with cesium magnetometer (Geometrics G-858g Magmapper). GPS receivers communicate using radio modems. Mobile GPS receiver (rover) connected to the magnetometer obtains reference corrections from base radio receiver. The set uses a radiofrequency range of 410-470 MHz which allowed to work in an open area with a radius of more than 1 km. The data defined in CMR format (Compact Measurement Record) is sent from base to rover receiver during the survey. The packet of information contains: signals L1, L2 of GPS satellites, GLONASS, position (coordinates), and parameters of the base. The Mobile RTK rover receiver is connected with cesium magnetometer G-858 via RS-232 serial what allows sending data from GPS and downloading it by the magnetometer recorder.

Geographical coordinates and height have the accuracy of equipment: GPS measurement has the level of horizontal precision: H: ± 10 mm + 1 ppm, and vertical V: ± 15 mm + 1 ppm.). The NMEA (National Marine Electronics Association) output data format sent from GPS contains GGA records (Global Positioning System Fixed Data) informing about the longitude, latitude, and height (above sea level) with 1 mm instrument accuracy. GPS sends the data by one per second interval time, finally interpolated due to the magnetometer measurements depending on the setting – usually 0.1 or 0.2 seconds. Location data is stored simultaneously with magnetic data and assigned by the time factor synchronous with the magnetic field measurements. Then the entire measurement data is transmitted using MagMap2000 software to the hard drive for further processing e.g. transformation of coordinate system from latitude and longitude values in degrees (BLH) to the metric system (UTM).

A survey carried out in the settlement area allowed for recognizing locations with high magnetic anomalies that have polar (dipole) properties. These are clearly visible on the magnetic map as color scheme dots of lower values (light blue) and high values (red color). Hypothetically these are the remains of the industrial iron ore kilns production areas or deposits of industrial rubbish.

It is worth mentioning that the instrument used for the geomagnetic survey was invented and constructed by Wiesław Małkowski from the University of Warsaw. 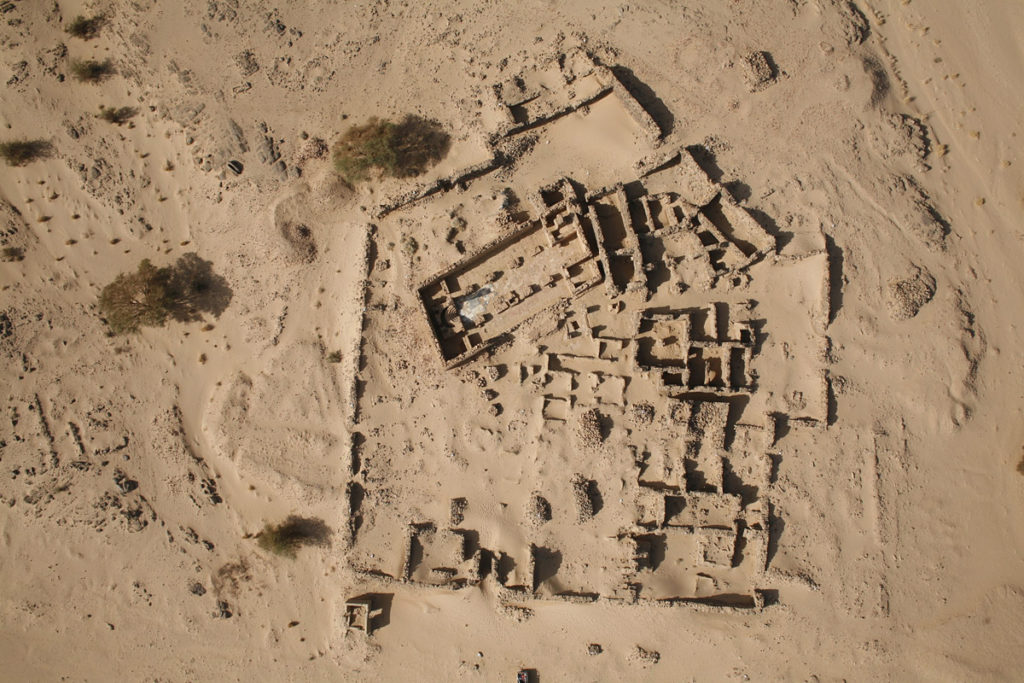 Weather conditions for kite aerial photography in Sudan are generally favorable and this was the case of the 2012 season’s work. The wind blew every day at the speed of 2-13 m/s. The remains of the Ghazali monastery, cemeteries, and settlement were clearly visible from the air, especially in the early morning and late afternoon. Several photo sessions were conducted and over 2000 photos were taken.

For taking aerial photos three different sizes of “flow foil” kites were used. The smallest kite was used with the strongest wind, medium in moderate, and big with light wind. Three hundred meters of line was used to control the height of the aircraft. The highest flight altitude was about 150 meters. During the photo sessions, Canon 5D with Canon 35mm 2.0 and Canon 24mm 2.8 lenses were mounted on a self-constructed gimbal and controlled remotely which allowed for shooting oblique and vertical photos. The photographer had a wireless view of the photos on the ground on the monitor via a 2.4 GHz video transmitter. Each session lasted about 2-3 hours.

Vertical photos with GPS RTK measurements were processed in Image Master photogrammetric software into Digital Surface Models and orthophotos. Fourteen orthophotos and digital surface models of different areas within rectangle of 700 to 280 meters of site concession were created. The ortophotomaps have plane resolution between 1 cm and 5 cm depending on the size of the area they cover. The digital surface model of the monastery was created from two photos and has a plane resolution of 3.7 cm and depth resolution of 15 cm. The 3D surface model of the church in the monastery was prepared also from two photos taken from the height of 56 meters. The plane resolution of this work is 1 cm and depth resolution is 3 cm.

All of this data was prepared in the same coordinate system (WGS 84 UTM 36N). Three-dimensional models were exported to VRML, OBJ, and DXF file formats with texture. Orthophoto maps were saved in the GeoTIFF standard. All this documentation will be combined with other results and investigated in GIS systems, such as Autocad or ArcGIS. In the course of processing, the information collected in the fieldwork will result in an orthophoto map of the concession. Kite photos allowed for correcting the sketchy plan of the monastery published by Peter Shinnie. Thanks to the collected information in the form of the photos and GPS data the team can now continue the prospection of the area form home, sitting by their computers. 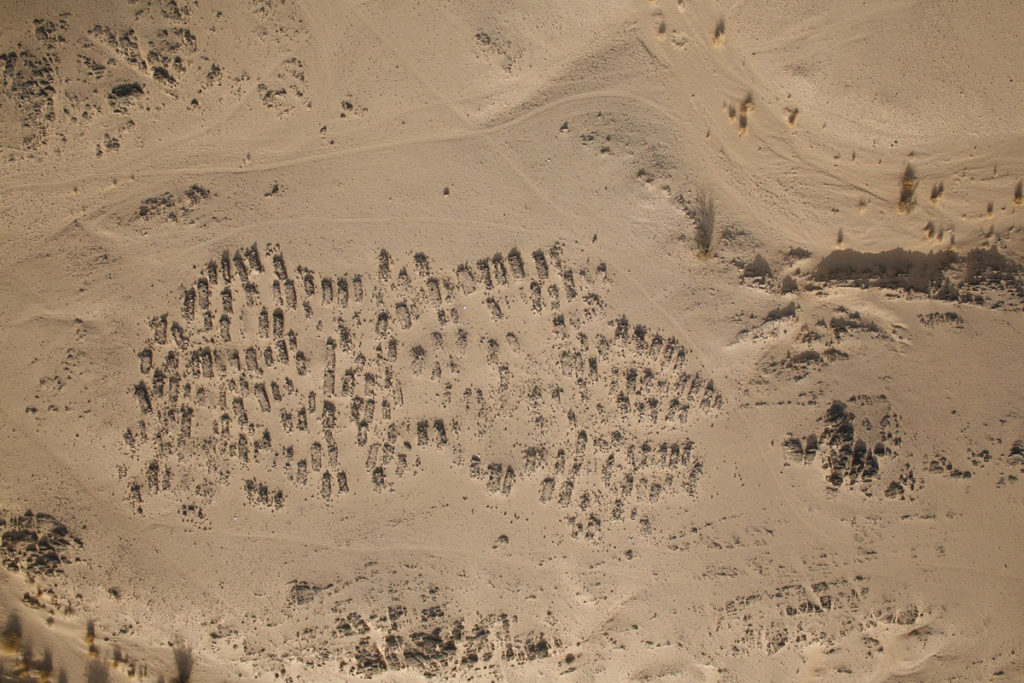 During the short season, the katholikon of the monastery and an attached building, located north of the church, and with a tank sunk in the floor were cleared of sand and stone and brick rubble. The building has been so far interpreted as either a baptistery or a room used during the celebration of Epiphany. The rubble contained elements of pillars flanking the apse and sundried brick vaulting, once sprang over the southern aisle. Moreover, the pillars and the inner walls of the church were cleared of the stone rubble that caused danger to visitors to the monastery. This cleaning resulted in the discovery of some features of the church that had been hitherto absent in the published plans, and of three fragments of tombstones, two made of sandstone, and a ceramic one. Two of them were sunk into the floor of the church, and the other one was found in the western niche of the south-eastern pastophorium.

The katholikon of the Ghazali monastery is a basilica built of sandstone, in the lower part of the walls, and of baked brick, in the upper. Its orientation does not follow the cardinal directions. Inability of determination of the east according to the course of Nile in this area points to the conclusion that the main axis of the church was determined according to either the sun movement or other astronomical observations. On the basis of personal experience of sunset at Ghazali I would rather acquiesce to the first method.

The church features all the characteristics of Makurian churches:

There was also a western entrance to the church in the north-western room, an unorthodox feature in Nubian church architecture. The floor of the church was paved with pottery tiles in the pastophories, baked bricks in the aisles, marble and granite in the sanctuary, and sandstone slabs in the western and middle parts of the nave. Yet it was just an underlay for a lime-plaster flooring identical to the plaster on the walls. It covered the floor of the entire building except for the sanctuary and, probably, the north-western room. The walls of the church were decorated with paintings preserved only in the north-eastern room and the central western bay. Some wall paintings in the semi-dome over the apse could still be seen in the nineteenth century.

As mentioned above, the western section of the church was divided into three parts. The south-western one contained a staircase consisting of three flights of steps. The entrance was located in its eastern wall and was finished with an arch, its capstone decorated with a carved cross. The central bay was open to the nave and all along its walls ran a bench. The inner walls of the western part were made of well-dressed sandstone blocks up to the height of 1.40 m. Higher up, the rest of the wall was built of baked brick, making the construction considerably lighter.

The central part of the church was divided into a nave and two side aisles by two rows of pillars, four in each row. The pillars, rectangular in plan, were built of baked brick cushioned with wooden beams laid horizontally. Four central pillars were strengthened by pilaster masses which simultaneously supported the arches spanned between them, on which, in turn, leaned a dome. The eastern part of the nave, from the point of the middle of the second pair of pillars, was turned into a sanctuary and paved with marble and granite. About 4 m from the mouth of the apse there were four pots sunk in the floor in a single line spanning the width of the nave. They were used as supports for beams for the construction of a wooden templon. 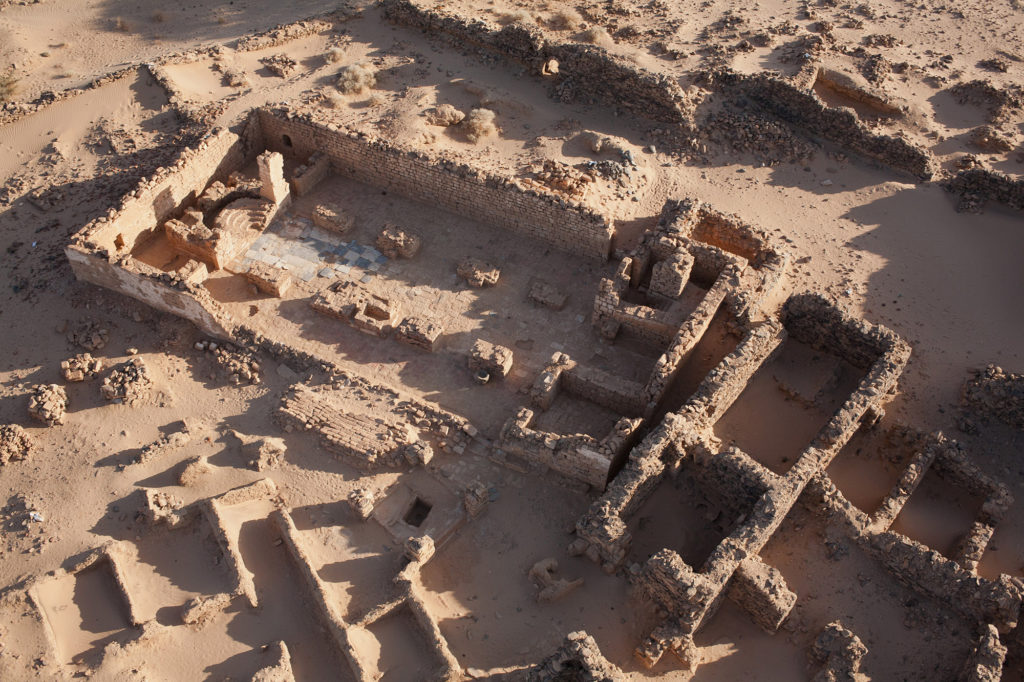 The apse was entirely filled with the synthronon, built of baked brick, and covered with lime plaster of the same kind that was laid on the walls and floor of the church. Ancillary rooms on both sides of the apse were accessible from the aisles. The entrance to the southern one might have been divided off from the aisle by a screen similar to the one in the nave since there was a pot sunken in the floor of the southern aisle immediately next to the south wall of the church, in the line with the screen in the nave. The western walls of both rooms were built in the lower parts of stone, and in the upper – of baked brick. The entrances in them had been crowned with arches that did not survive. In the eastern wall of the north-western room, there was a niche, and there was a mastaba built against the northern wall of the apse.

The most interesting discovery of the season, in terms of the architectural design of the site, was something that escaped the notice of all of the people who had published the church’s plans so far: the building is not rectangular in plan but equilateral, with the north wall moved slightly more to the east than the south one. 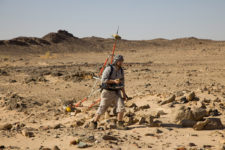 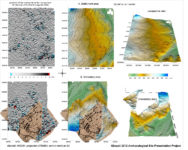 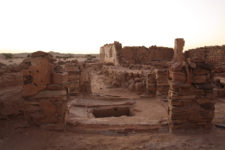 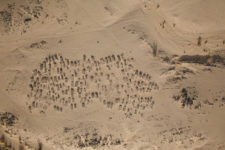 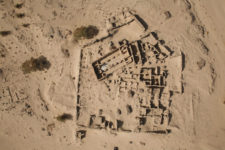 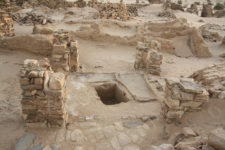 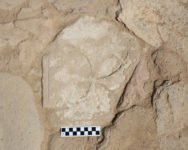