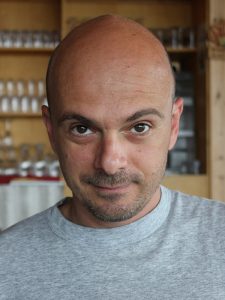 From 2000 to 2002 he worked for the Antiquities Service in Attiki, Greece. Since 2003, he has worked as an archaeologist in Sudan in the frame of the Merowe Dam Archaeological Salvage Project, at Jebel Barkal, and at Akkad. Alexandros organized the Greek Cultural Center “Ergamenis” in Khartoum. He has led the renovation of the Museum at Jebel Barkal, and he was the contractor of UNESCO for the rehabilitation of the Permanent Exhibition of Medieval Antiquities in the Sudan National Museum. In 2007 and 2008, Alexandros worked extensively on the medieval collection stored in the Sudan National Museum. He has published several articles on Medieval inscriptions from Nubia, one of which concerns the Christian inscriptions from Sai, the second largest island on the Nile where he has directed three field seasons of the Medieval Sai Project as part of the French Mission on Sai Island directed by Vincent Francigny. Alexandros defended his Ph.D. thesis at Humboldt University, Berlin in February 2013. The title is “The Greek Manuscripts on Parchment Discovered at Site SR022.A in the Fourth Cataract Region, North Sudan”. He is currently a postdoctoral researcher at the University of Bergen with a project on “Religious Literacy in Christian Nubia”. Apart from the material from Sur Island, the data basis for his current research consists of the textual record discovered at the sites of Qasr el Wizz (to be published in the Oriental Institute of Chicago Nubian Expedition monograph series, vol. 15), Serra East (to be published in the Oriental Institute of Chicago Nubian Expedition monograph series, vols 12 and 13), Attiri Island (published in 2016 as the first monograph of the Nubiological journal Dotawo), and sites of the Alwan kingdom with extensive textual sets in the form of graffiti (in collaboration with Corenlia Kleinitz from Humboldt University, Berlin). He has co-edited three collections of articles on different topics of Nubian and Sudan Studies, and has received several grants for the organization of workshops and seminars in Norway and Greece. He has been invited to give lectures in Norway, Greece, France, Austria, and Germany. Since 2014, he is responsible for the field of Sudan History in the online Great Norwegian Encyclopedia.